I used to have a recurring dream where I would discover a whole new part of my house that I had never known was there before, always in the basement and often ridiculously large. The rest of my dream would consist of me planning what I would do with all that extra space and I always woke up disappointed when I realized it was only a dream.

Apparently this is a common dream which is supposed to symbolize finding new potential within ourselves:

“New rooms in a house in a dream can relate to areas in our lives where we are discovering new skills, abilities or strengths within ourselves.  While we may feel we know who we are and what we are capable of, dreams of new rooms invite us to open our minds to the possibility that we have even greater potential than we thought.  New rooms are like an extension of ourselves.  Just because a house is built does not mean we need to move out when we need more space, we can extend and build to make the house accommodate our growing and changing needs.  So too can we extend our own personality, to embrace new ways of living.  Dreams of new rooms invite us to look at what we thought were our limitations, and to recognise that we can move beyond them.” -Amy Campion, The Dream Well

That’s an interesting way to look at my recurring dream, but I don’t think it applies to me. I only started having the dream when we moved into our first small apartment and I kept having the dream wherever we lived until we moved into our current home. Before we moved here, we always lived in close quarters piled on top of each other like The Napping House. Since we moved to a home with enough space that allows us to spread out and to have a place for everything and everyone, I’ve stopped dreaming about finding extra rooms. For me, the dream was much more a very practical desire than about discovering the potential within myself.

One of the benefits of having extra space is that we have other places to put our televisions so we don’t have to have one in our living room. It’s always bothered me when we’ve had a t.v. in the living room because it seems to make it the central focus of the room – all the furniture placement depends upon the television placement, and as a result, gives the impression that we center our whole lives around the t.v. I like to have the living room set up so people face people, so our focus is on each other.

It’s a really nice idea in theory, but I’ve noticed that instead of sitting together and chatting in the living room, our family often spreads out to our separate corners of the house and to our separate screens. Even though I value my own personal space, it seems that having all that extra room leads to separation, and that can’t be a good thing.

This week is spring break and since we’re not traveling anywhere, I tried to think of a way to avoid the usual family sprawl, something to bring us all into the same room. And so I turned to the one thing I usually view as the nemesis to our family togetherness – the television.

Ever since I finished reading the Harry Potter books last summer, I’ve wanted to watch the movies. I was curious to see how they adapted the books to film and how the characters I imagined compared to those in the movies. We begged and borrowed DVDs from friends and had ourselves a Spring Break Harry Potter Movie Marathon (we capitalized it to make it seem like more of a special event).

Just because I’ve never seen any of the movies does not mean I live in a box. I knew what some of the main characters in the movie looked like before I read the books, so I was able to picture them correctly, but I was way off on Dumbledore. I was pretty sure he was played by Ian McKellen but I guess I was confusing him with another bearded character from another film version of books I’ve never read. I had not realized that Dumbledore was played by Richard Harris (from Camelot!) for the first two films and Michael Gambon (from Wives and Daughters!) for the rest. 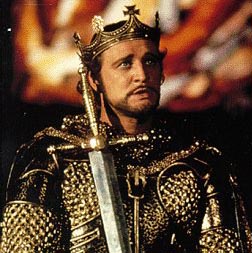 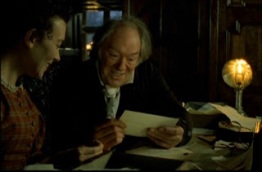 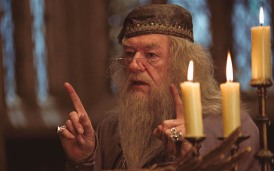 Since I’m a big fan of BBC dramas it was fun to see which great British actor would pop up next. Probably most surprising was Helena Bonham Carter as Bellatrix LeStrange – I didn’t realize she was in it and she was super creepy. Whenever she and Maggie Smith were in the same scene I imagined it was Lucy Honeychurch’s chance to release all of her frustrations on Charlotte Bartlett and I was tempted to cheer her on. 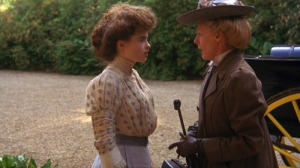 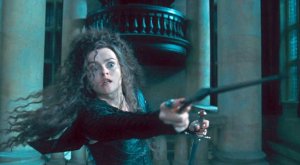 And let’s not forget about Dawn French’s role as the Fat Lady.

I liked Hagrid much better in the movies than in the books and Fred and George were much less annoying to me this time around. Dobby was larger than I had imagined and so was Hogwarts. I know they left parts of the storyline out in the movies, but I didn’t really miss them.

Watching all eight movies in seven days was interesting – not only seeing the kids grow up so quickly (they were so cute and tiny in the first movie) but also seeing the evolution of special effects technology (in the first two films it looked like video game animation). It also was more dramatic to see the change from the light, happy times in the first few movies to the darkness and fear in the last few.

Now that I’ve watched all the Harry Potter movies I feel less like I’ve been living in an underground bunker all these years and my kids seemed to really like our movie marathon. We had plenty of popcorn and Sour Patch Watermelons to keep everyone happy as we all squashed together on the couch or my bed and then I had to remind myself how happy everyone was later as I brushed the popcorn kernels and Sour Patch sugar out of my bed. We discovered some new funny lines to add to the family lexicon, including our own pronunciation of Ron Weasley’s name: “Won WeeWee” (trust me, it’s hilarious.) My husband, who does not have a spring break and didn’t get to join us for more than one movie, wants to make movie night a more regular thing.

I’m still not about to move the t.v. into our living room but this week has made me more aware of the ways my need for space might not match what my children need. Judging by how early in the morning they tried to wake me each day to start the next movie, apparently what they need is my shoulder to rest their bony heads on, my ribs to jab their elbows into, my pillow to borrow, my Snuggie to steal, and my candy stash to raid. And judging by the fact that I’m already trying to decide what we’ll watch together next, I guess I need some of that too. 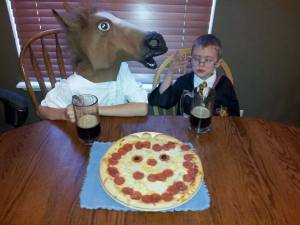